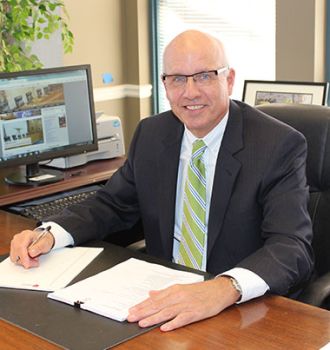 A native of Washington, Missouri, Doug Aholt graduated from the University of Missouri-Kansas City with a Bachelor of Business degree in 1976 and received his J.D. degree from U.M.K.C. in 1979. Doug began his legal career with the Legal Aid of Western Missouri (Kansas City) where he was a Reginald Heber Smith recipient. In 1980 he moved to Atlanta with his wife where he worked a number of years with a small general practice firm prior to going to a medium-sized insurance defense firm where he became a partner. For years he represented manufacturing companies and trucking firms in catastrophic injury and death cases.

In 2000, Doug and his current partner formed Chambers, Aholt & Rickard, LLC to dedicate themselves to demanding justice and getting results for individuals and families who are injured due to the fault of others. That same dedication is the cornerstone of Chambers & Aholt, LLC which moved its office to Decatur in 2013. Through his experience as a defense attorney Doug has the respect of insurance companies and defense attorneys. Those relationships have continued to benefit him today as he goes against the interests of insurers and his former defense colleagues. Doug knows what to expect from the parties he used to represent and his adversaries respect the fact that they are going against a lawyer who will zealously pursue his client's rights.

"We work to help you hold others accountable and move forward with your life."

In addition to representing his individual clients, Doug has been an active member with the Georgia Trial Lawyers Association and the DeKalb Bar Association in DeKalb County, Geogia, where he served as the President of the Trial Lawyers Section for many years. He is also a member of the American Association of Justice.

Doug also dedicates himself to being an active community member of his hometown, Decatur, Georgia. As a member and former chairman of the Board of Decatur Arts Alliance, you will see Doug at numerous festivals, local stage productions and various art events. While Doug's children have graduated from Decatur High School, he still remains active with the booster club. His community awards include Decatur Hometown Hero; YMCA Volunteer of The Year Award and Booster Club Volunteer of The Year Award.